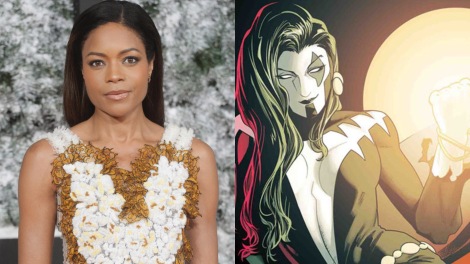 Variety is exclusively reporting that Naomie Harris is in negotiations with Sony Pictures to play the villain Shriek for the upcoming Venom sequel.

The 2018 film focused on a spaceship belong to bioengineering corporation Life Foundation crashing back to Earth as it tries to bring back four symbiotic lifeforms they found during their secret mission. Investigative journalist Eddie Brock believes that the CEO Carlton Drake is shady and when he tries to take Drake down, he loses everything. As Eddie Brock attempts to revive his career by investigating the Life Foundation,  he finds a way into the Life Foundation and bonds with an alien symbiote that gives superpowers to its host and communicates with him as it refers to itself as Venom.

The film teased the antagonist for the sequel with Woody Harrelson appearing in the post-credits scene as Cletus Kasady, who in the comics is a character that merges with a symbiote to become Carnage. A few days ago from Deadline, they reported that sources close to the project told them that Shriek was being incorporated into the plot.

In the comics, Shriek is a sonic-powered accomplice and romantic interest of serial killer Cletus Kasaday, so Naomie Harris could potentially partner up alongside Woody Harrelson’s Carnage against Tom Hardy’s Venom. Michelle Williams will also be returning and Andy Serkis will direct.

Sony recently dated an untitled Marvel sequel for October 2020, which could potentially be Venom 2.

One response to “Venom 2: Naomie Harris In Talks To Star As Shriek”