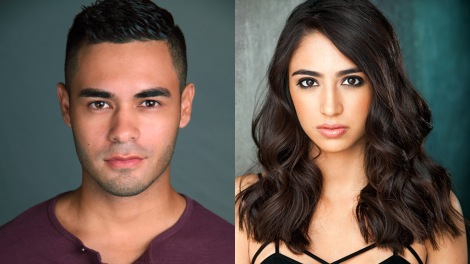 Deadline is exclusively reporting that Gabriel Chavarria and Jessica Garza have been cast in the lead roles for the television series adaptation of The Purge at  USA Network and SyFy.

The premise of The Purge franchise is set in near future America where once a year there is a twelve hour period where all crime, including the most insane acts of murder, are legal. The television series comes from franchise creator James DeMonaco, Blumhouse Television and Universal Cable Productions. There’s been a trilogy of films released already, with a fourth set to come out this summer. The original starred Ethan Hawke and Lena Headey, making over $89m worldwide on a $3m budget. While the original was a contained thriller, its sequel Purge: Anarchy, went city wide and was more action orientated starring Frank Grillo, making over $111m worldwide on a $9m budget. The last installment, Purge: Election Year, seen Frank Grillo reprise his role from Anarchy and star alongside Elizabeth Mitchell, making over $118m worldwide on a $10m budget.

The report states that Gabriel Chavarria (whose credits include East Los High and Lowriders) will be playing the role of Miguel, a US Marine with a hard edge and a noble mission. After receiving a cryptic letter from his little sister, Penelope, he returns to town on Purge Night, prepared to face the senseless violence in the streets alone in order to protect what he loves most…his family. Jessica Garza (whose credits include Six and A.P Bio) will be playing the role of Penelope, who belongs to a Purge-worshipping cult. Having pledged herself to be sacrificed at the behest of their charismatic leader, Penelope’s faith is tested when she is exposed to the ghastly realities of the Purge.

10 responses to “The Purge: Gabriel Chavarria And Jessica Garza Cast As Leads For TV Series”